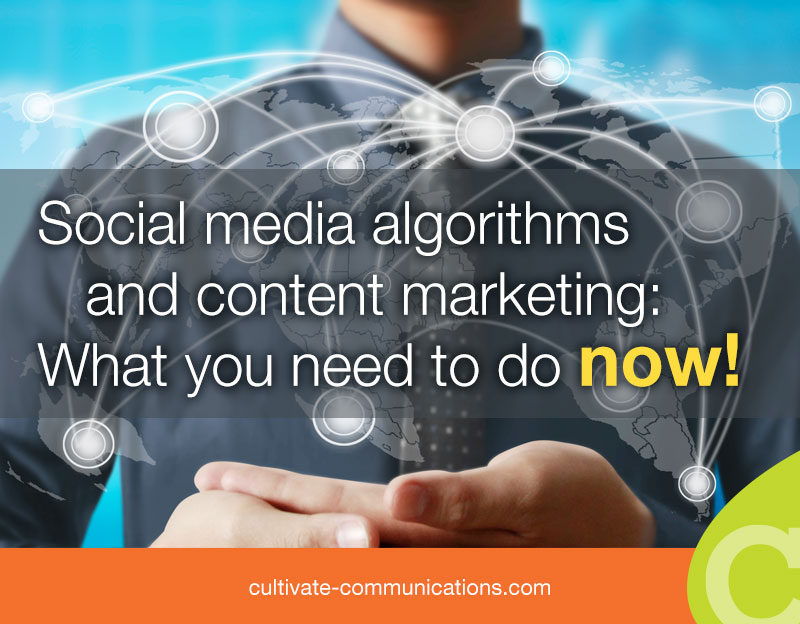 Content marketing is becoming more important than ever, thanks to the major social media channels moving from chronological to algorithm-based feeds.

This major change leaves you with two choices: Pay a premium so your content will be visible to your followers, or create experiences that are so valuable that your followers will share them for you.

In the past, when you published content and promoted it on the major social media channels, you could expect a decent amount of organic engagement. Maintaining a social presence was fairly easy, because you had a free pass to promote your brand as much as you wanted.

But all that has changed - and so must your content marketing strategy.

The move to algorithm-based social feeds

Since the advent of social media, most feeds have been chronological, displaying the newest posts at the top. Other than a few promoted tweets and posts appearing at the top of your feeds, not much has changed during the last decade.

But in recent months, Facebook, Instagram and Twitter have announced that they are replacing their chronological feeds with algorithm-based timelines. In each case, the developers have claimed these moves are in response to the glut of content that is exceeding users’ ability to interact with it.

Their motives are not entirely altruistic, however, Moving to algorithm-based feeds enables them to present a greater number of ads and paid placements, based on each user’s preferences, demographics and past viewing habits.

All of the major social media channels are under pressure to increase revenues. That means they are experimenting with and tweaking new monetization models on a more frequent basis. Here are several examples:

Facebook pages: Organic reach of Facebook pages has steadily declined to the point where it is currently at a meager 2%. Unless you pay to promote your updates, they will be all but invisible to your followers. More recently, Facebook has announced two new paid promotion products: Instant Articles (promoted articles) and Canvas (rich media ads). Both appear in the news feeds of users.

Instagram: This Facebook-owned photo sharing channel just announced that it is moving to an algorithm-based feed. It’s also likely that Facebook will roll out Instant Articles and Canvas on Instagram in the near future.

Twitter started experimenting with “while you were away,” a set of curated tweets from people you follow and have interacted with in February, and has rolled it out as the default for all users as of mid-March.

Even Google is getting into the act. The search engine giant has recently done away with sidebar pay-per-click ads, and has added a fourth one to the top of the search results page. This reduction in advertising real estate means that you will be paying more for your pay-per-click ads with Google.

In addition, Google recently announced that it is going to start showing a Twitter-like selection of content at the top of search results pages. Presumably, these will include ads.

The bottom line is that the major social media channels are evolving into media companies, with all the attendant cost structures and pressure to generate revenue and profits. In a sense, they are turning into gatekeepers, controlling which messages get communicated via their platforms.

Many brands will choose to pay the premium so that their content will still appear in the news feeds of their followers. That’s the easy - albeit expensive - way.

But there is another way: By producing content that is so valued that your followers will feel compelled to share it. By doing so, they will help you bypass the social media gatekeepers, and will ensure that your messages get distributed to a wider audience.

It’s time to step up the quality of your content game – or toil away in obscurity. If you don’t have a documented strategy that includes audience personas, a detailed buyer’s journey for each audience segment and content mapped to each key step of those journeys, now is the time to do so. You’ll also need a “content tilt” – a unique point of view that differentiates your content so it gets the attention it deserves.

Finally, don’t overlook paid promotion. With a glut of content clogging up channels like Facebook and Twitter, it’s getting harder for your content to break through the noise. Some element of paid promotion is a must for your messages to achieve the reach they deserve.

It's time to develop your plan

Do you have a documented content strategy, customer personas defined and content mapped to it? If not, now's the time to develop a comprehensive plan to take your content initiative to new levels of effectiveness.